What do a duck, a sheep and a cockerel have in common? 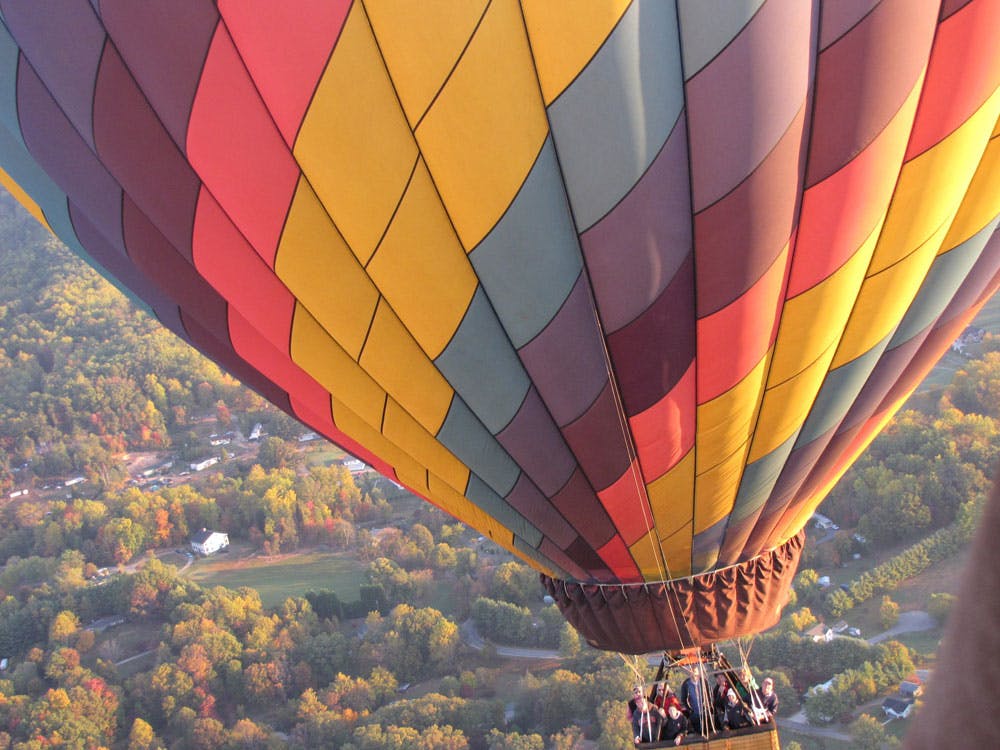 It was the two brothers, Joseph and Ettiene Montgolfier, who first successfully demonstrated the flight of the balloon. One of the first recorded flights was on September 19th, 1783, in the court of the Château de Versailles, with Louis XIV, Marie Antoinette and 120,000 Parisians witnessing the historic flight. The balloon had a wicker basket suspended from underneath it, which carried three passengers: a sheep, a cockerel and a duck. The flight, which was an experiment to find out whether or not sudden changes in altitude would be harmful, took off from Versailles and landed at Vaucresson, a forest outside of Paris. The flight was deemed a success when the animals, despite a rough landing were completely unharmed, and the race to be the first man to fly was on.

On November 21st 1783, this objective was achieved when two men took to the skies for the first time in a balloon that had been built using paper and silk by the Montgolfier brothers. (It is worth noting that this flight preceded that of Orville Wright at Kitty Hawk, USA, by just over 120 years). The 22 minute flight was piloted by two noblemen, Marquis François d’Arlends and Jean-François Pilâtre de Rozier; (both from the court of Louis XV1). Watched by approximately 400,000 Parisians, again including the King and Marie-Antoinette, the balloon majestically rose from the gardens of the Château de la Muette to a height of 900 meters. Keeping the balloon flying by burning straw, they travelled about 10 kilometres in 25 minutes, before finally landing in some vineyards several miles away. Local winemakers and farmers, terrified by this fiery dragon falling from the sky, ran towards it with pitchforks waving. They were finally placated when the pilots jumped out of the balloon’s basket laden with bottles of champagne, which they cracked open to celebrate – a tradition that is still practised today.

Jean-Pierre Blanchard was quick to follow suit and on the 30th November 1784, along with an American physician, named Dr. John Jeffries, he launched his first balloon flight from Rhedarium Gardens, London, finally landing on the banks of the Thames. Just a few weeks later the two teamed up once again and on the 7th January 1785 they became the first men to fly across the English Channel, carrying with them the very first airmail letter!

Ballooning, however, was not without its dangers. During July of the same year, Jean-François Pilâtre de Rozier attempted to cross the Channel in a hybrid gas/hot-air balloon, along with a passenger named Romain. The flight became the first aviation accident when a fire caused the hydrogen to explode, killing both men.

Perhaps because of this, Blanchard began to experiment with the idea of a parachute, and later that same year demonstrated his idea by dropping a basket carrying a small animal. The basket, supported by a rudimentary parachute, landed safely leading Blanchard to pursue his determination to provide adequate rescue and safety resources for balloonists. The exact date that he personally parachuted out of a gas balloon is unknown, although it was believed to be during 1785; however it is clear that Blanchard foreshadowed the later parachute descents of Andre Garnerin.

Jean-Pierre continued to give balloon flight demonstrations throughout the world, including the first ever balloon flight in North America where he flew from the Washington Prison Yard in Philadelphia, Pennsylvania to Gloucester County, New Jersey – a flight which was observed by American President, George Washington. Blanchard’s wife, Marie, who had also learnt to pilot balloons, accompanied him on many of these demonstrations.

Sadly, in February 1808, Blanchard suffered a heart attack while on a flight over The Hague in the Netherlands and fell more than fifty feet. He never recovered from the fall and died on March 7th, 1809.Our modern hot-air balloon, which was developed in the United States during the 1960’s, has two main technological advances that differ from the balloons of the Montgolfier brothers and Jean-Pierre Blanchard (which were gas balloons). Firstly, the envelope (the actual balloon) is made with rip-stop nylon, which is very safe (it is the envelope that carries the burner) and, secondly, the LPG burner is now used. When thinking of a balloon many people remember the balloons that were covered in net; with sandbags that were attached to the basket – in other words, the gas balloon. Generally used for long flights, they are something of a rarity in France, where only three are known to exist. The difference between the gas balloon and the hot-air balloon can be clearly identified by the fact that the envelope of a gas balloon is closed at the bottom, trapping the gas within. To gain or lose height, sand is used. We’ve all watched those films where whole sandbags are thrown over the side as the balloon needs to descend. In fact this is a false picture of a gas balloon, as ascent and descent is achieved by using very small amount of sands.In contrast, the hot-air balloon is controlled by heat. The envelope, which is filled with air and is open at the bottom, is heated until the balloon is ready to rise into the sky – the height of the balloon being controlled by either cooling the air (descent) or heating it (ascent).
Tweet
Email this page to a friend. Email
Click here to visit previous post ← Previous Post